Is Aled the best boss Radio 1 has had in years? 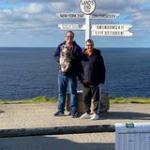