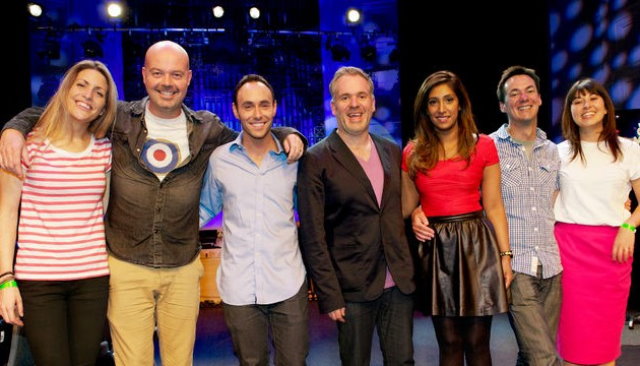 Chris Moyles bows out of the Radio 1 breakfast show

Chris Moyles and his team bowed out from Radio 1 this morning after eight years of presenting the prestigious slot.

Moyles has not made it clear what he plans to do after appearing in Jesus Christ Superstar but it is widely reported that he will take the 10pm slot nearer to Christmas. This was also initially reported by the BBC earlier today, but removed shortly after we pointed out the story.

Dom has already announced that he will no longer read the news and will be leaving Radio 1 – suggesting he may take up a presenting role with another station. Aled will continue to present the Radio 1 Surgery, but will take a 3 month break from producing, opening up speculation that he may produce Chris’ new show.

As we reported this week, one member of the show is rumoured to be taking on a new role presenting the new for the Radio 1 Breakfast Show with Nick Grimshaw when it starts on September 24. Unofficial Mills believes that Tina will be given this role although no announcement has yet been made.

Scott Mills will present the breakfast show for one week until Grimmy starts.

Jono is a social media manager working in the news industry. He created Unofficial Mills back in 2004 when he was just 15! Two decades later he still contributes to the website.
Newer Post
Vernon Kay and Reggie Yates to leave BBC Radio 1
Older Post
Which Moyles team member will remain on breakfast?