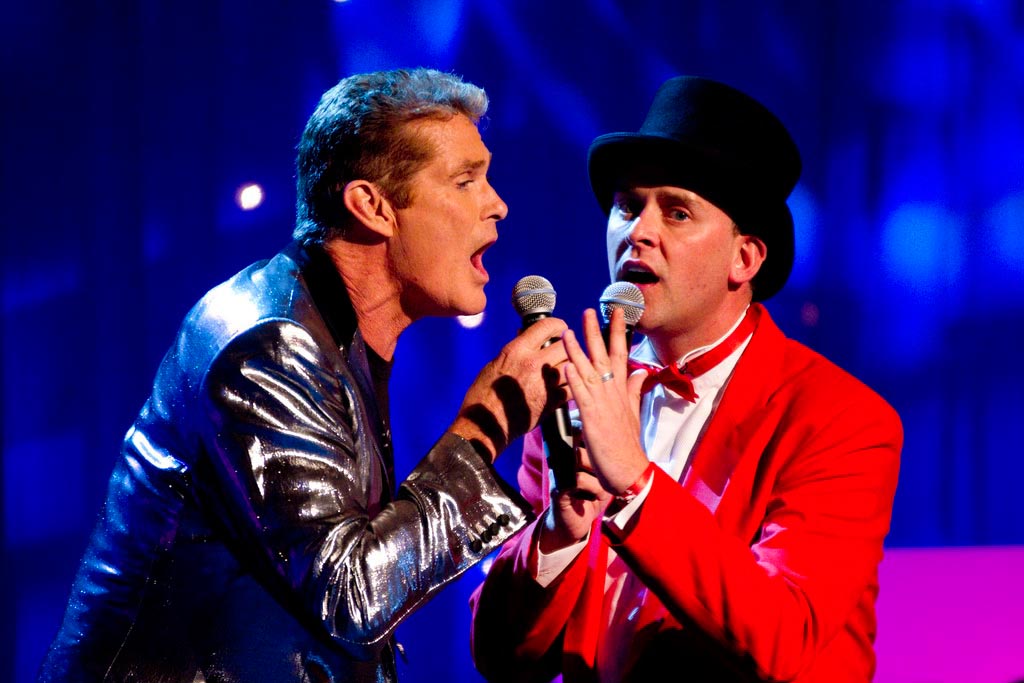 TOTDS: Expect scenes of a sexual nature in Edinburgh

The Scott Mills Show returns to the Edinburgh Festival Fringe this week along with the Nick Grimshaw crew too. The Fun & Filth Cabaret shows are back all week, and this year it will be broadcast live on the BBC Red Button and online from 11pm.

Those joining in the stage shows include the PR4L, The Boy With Tape On His Face, Pappys, Tim Vine, Mark Wright, Paloma Faith, Vernon Kay, and Example!

We caught up with The One That Doesn’t Speak who dropped us a few hints about what to expect this week.

1. You’re back at the Edinburgh Festival Fringe once more – what does the festival mean to the Scott Mills Show?

It’s the highlight of our year. Before we first came here in 2009, we weren’t sure if there was a lot to really interest Radio 1 listeners; the Fringe was always covered by The Guardian Guide and the Culture Show, but never really any young people’s media. As soon as we looked more into it though we realised how much there really is for our listeners.

Obviously, Scott Mills The Musical was a highlight for all of us, but now I love being able to show people the range of brilliance and weirdness that there is at the Festival.

2. From Monday to Thursday there is a line-up packed full of celebrities – who are you most looking forward to see?

There are lots of celebs but there are also lots of unknown acts too, and I’m mostly looking forward to some of those. I think a lot of people come to the Fringe to see some of the bigger names that they may have watched on Live At The Apollo (and we certainly have some of those in the Fun & Filth shows), but the Festival is really about smaller acts taking risks and putting everything into their shows (effort-wise and financially). I’d really recommend people check out some of the unknown talent. If you come here, just find a weird sounding show in the Fringe magazine and go see it. As far as the Fun & Filth goes I’m looking forward to an act called East End Cabaret and a man called Barry Morgan. They are not to be missed!

3. Who do you think will be the biggest diva on the bill? The PR4L?

As long as the rooms are the right temperature, the Posh lady will be fine. It’ll mainly be Chris being the biggest nightmare, almost certainly complaining about lunch. It’s his favourite meal of the day: he talks about little else in the two hours beforehand and is usually disappointed by it, leading to moaning for about two hours afterwards.

4. Unlike last year, there appears  to be less emphasis on the team. Can we expect to see TOTDS on our red button over the week?

You’ll probably spot me a bit hovering in the background! Possibly even onstage at one point, but I’m not saying when.

5. Finally, it’s called Fun and Filth and Scott promises it will be filthier this year. Do you recommend listeners avoid watching the red button with their parents?

There could be a few cringe moments if you do that, yes. Expect nudity, scenes of a sexual nature and mild peril!

Tune in to Scott Mills and Nick Grimshaw in Edinburgh all this week.

Jono is a social media manager working in the news industry. He created Unofficial Mills back in 2004 when he was just 15! Two decades later he still contributes to the website.
Newer Post
Win! A signed copy of Scott’s book ‘Love You, Bye’!
Older Post
Sara Cox will cover for Fearne Cotton