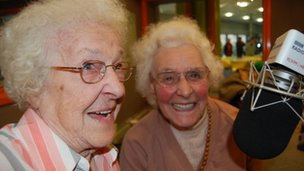 Beryl and Betty pip Scott to a Sony Radio nomination

If you’ve been listening to The Scott Mills Show you’ll now be familiar with these two ladies. It’s Beryl and Betty from BBC Radio Humberside – who are up for a Sony Radio Award for the most entertaining show.

They’ve pipped Scott to the prize that he’s been nominated for most years and, along with their friend David, are taking on Adam and Joe for the award!

Beryl is 86 years of age while Betty is 90 years old and both of them prove that – unlike what we reported last week – you can never be too old to be nominated for a Sony Radio Award!

Beryl and Betty frequently give shout outs to their 293 fans on Facebook. We think that it’s about time they got themselves a fansite too. We’re not so sure Unofficial Beryl and Betty works, any suggestions?

Jono is a social media manager working in the news industry. He created Unofficial Mills back in 2004 when he was just 15! Nearly fifteen years later he still contributes to the website.
Newer Post
Scott’s waking you up on breakfast this week
Older Post
All change at BBC Radio 1 over the next week!