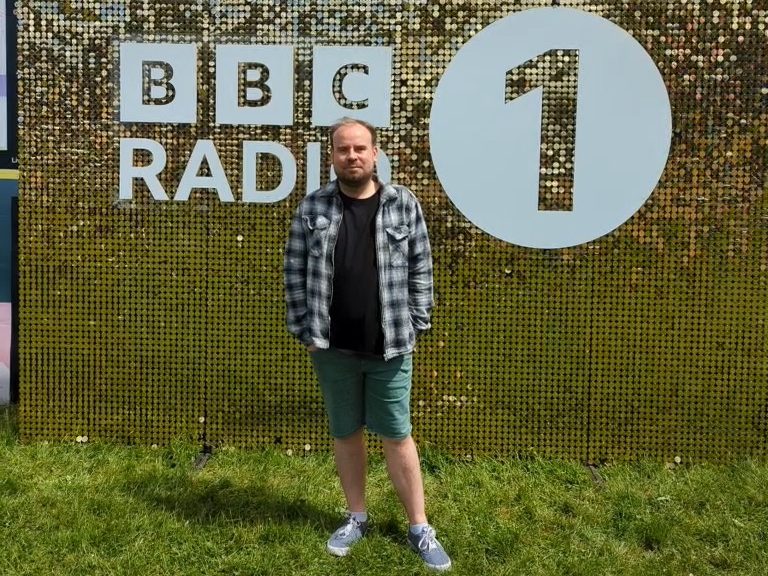 Radio 1’s Big Weekend is back after a three-year hiatus – and this year’s festival didn’t disappoint.

It turned out Coventry was the ideal place to hold the first major Radio 1 event since lockdown, not least because it was one of the few places in the country where the weather remained dry for the three days over the weekend.

Our first stop on Friday was the Radio Academy Training Day at the university where we caught up with Greg James and his team telling us all about how the pandemic provided a ‘reset’ for Radio 1’s Breakfast Show – and how it had helped transform the programme from the celeb-fest it once was under Grimmy.

Greg was in fine form with the audience – mostly compromised of radio talent of the future – with both the presenter and his producer Chris Sawyer emphasising how key it is to get the station out of London and broadcasting from the areas the station services. It sounds like plenty of outside broadcasts are on the cards following on from the success of Big Weekend, especially now it has new tech to help it do that. 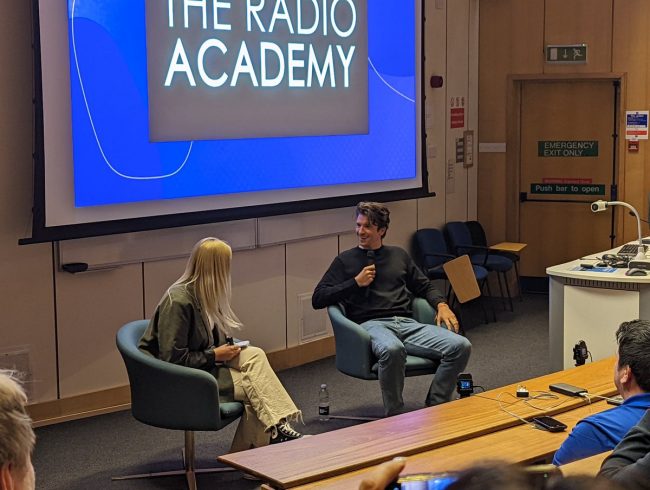 Greg James at the Radio Academy

Getting to and from War Memorial Park on Saturday was straightforward – but it appeared asking Ed Sheeran to open the event provided challenges. Unlike other Big Weekends, where people trickled in throughout the day, the Main Stage was packed by 12.30pm and the queues for food, drink, and toilets formed early on.

Nonetheless, it meant the festival vibe kicked in quickly – and the socials filled early with content from the festival. From then on, the sun provided a brilliant backdrop for the likes of Sigrid, Anne-Marie, Yungblud, Mimi Webb and Joel Corry entertaining crowds throughout the day until Calvin Harris headlined. The female singers, in my opinion, were understated in their performances on Saturday, with Mimi Webb and Sigrid just as worthy of Main Stage status with their ability to get spectators singing along. 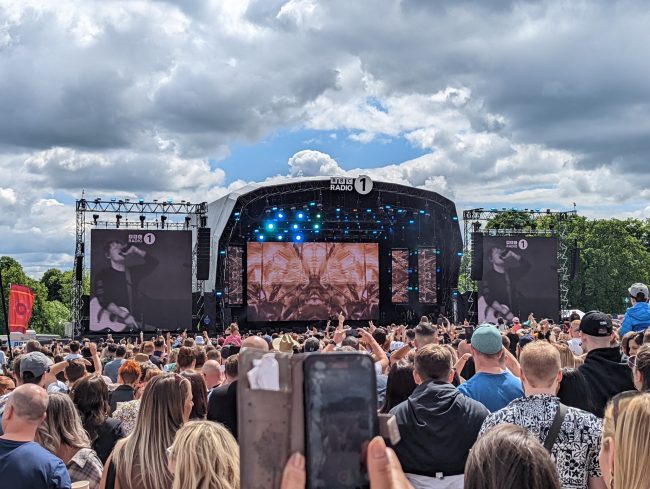 Visitors this year were also treated to a Dance and Relax stage – promoting both Radio 1 strands of the BBC Sounds app. It felt like both were underutilised at the stage, with the Relax tent used as an area for people to eat food or meet up, and the Dance stage more of a thoroughfare for those moving between the two main stages.

The Radio 1 box, where the presenters were based during live broadcasts, also appeared to be a great addition. But plonked so close to the key stage made it tricky to pass without scores of fans stopping by to ask for a wave from the presenters. By the Sunday the area had been cordoned off, suggesting a rethink might be needed before it’s rolled out at other events. 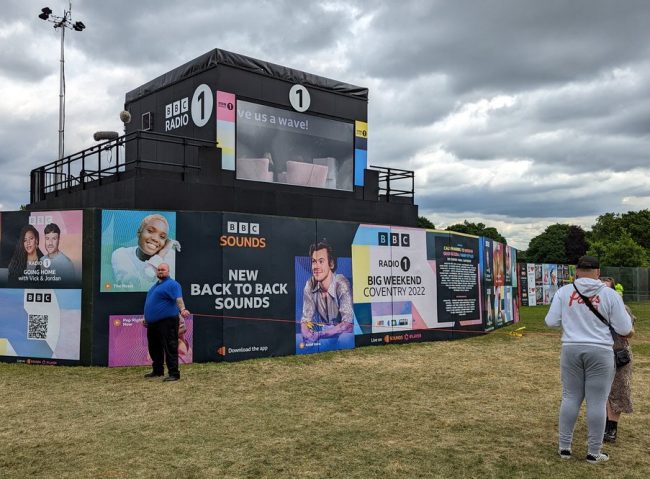 My Saturday highlight wasn’t the headliner, but Tom Grennan, who had styled himself as a ‘local lad’ with his connections to Coventry. Grennan not only managed to ride a horse on-stage like Lady Godiva – made up of presenters Scott Mills and Chris Stark – but he also brought on a Coventry City player to act as some sort of backing dancer. It sounds random writing it up, but it won the tent over.

The chants of ‘Sky Blue Army’ over the top of By Your Side are still stuck in my head three days later and provided a great atmosphere as the people of Coventry joined in.

If Saturday felt like a big day, Sunday was even bigger. It was non-stop music from the moment I arrived, with nice guy George Ezra opening the Main Stage and Wet Leg on the Future Sounds stage shortly after. We racked up thousands of steps trying to get between the two stages as we caught Dermot Kennedy, Mabel (who seemed to forget the words to her biggest hits), Holly Humberstone, Alfie Templeman, and Becky Hill. A surprise appearance from Tom Walker on the Introducing stage topped off a fun Sunday afternoon. 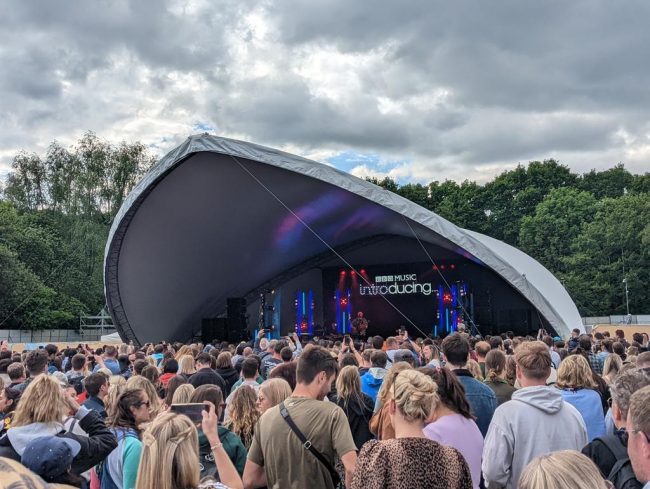 It seemed clear that the number of attended superseded expectations for event organisers as the number of lanyards and merchandise quickly sold out, with some fans even offering to pay double on Facebook to have one as a memory of the event. It was clear, for these fans, there was only one name they wanted to remember – Harry Styles.

In preparation for the final acts, we made our way to the front of the stage, which had been separated by various barriers throughout the site to help with crowd control. It was Lorde I was most looking forward to, but it soon became apparent that was not why everybody else was down the front. 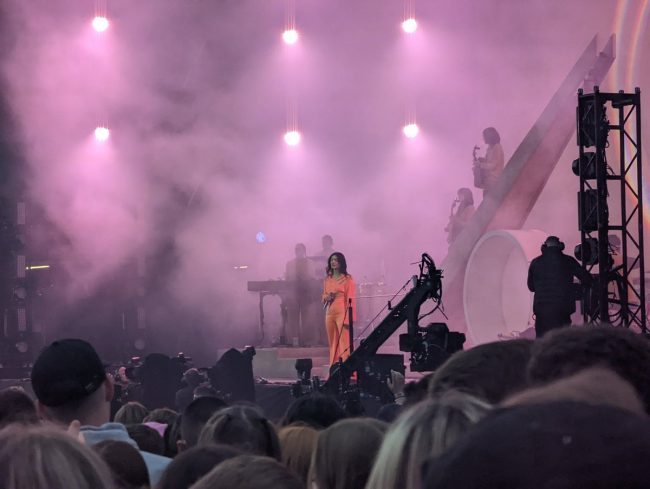 Lorde’s mellow tones were often drowned out by talking from those anticipating the headliner. Even one Radio 1 podcast presenter appeared to spoil the music for those around them by leerily shouting throughout the set – although Lorde didn’t help things by picking fewer of her well-known tracks and opting for her new music. But by the time she had picked up the pace with Green Light the crowds were back in the mood, and everybody was joining in with the singalong. She still remained one of my favourites of the weekend, even if not everyone appreciated it.

And then it was the final countdown to Harry. Radio 1’s Arielle Free provided the soundtrack, whilst the security guards and even a small child at the front kept the audience fired up by getting them all to cheer along in the interval.

By the time Styles had come on stage there was nowhere to move. He had brought tens of thousands to the Main Stage – from the very young to the old – and they were all game for his set. 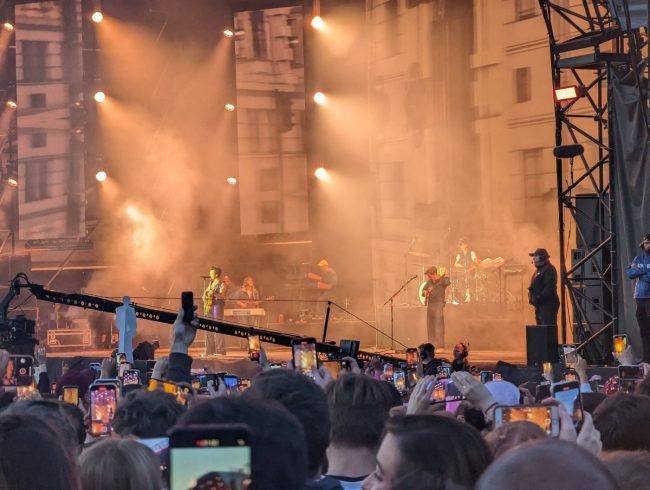 He did not disappoint – jumping from some of his newer tracks to some of the classics, and even a rendition of a One Direction anthem. It was an absolutely incredible atmosphere, a gig only Radio 1 could pull off. Even I couldn’t resist getting a selfie by the stage while in the presence of pop royalty.

It felt like this year’s Big Weekend went far too quickly, but this year’s event won’t be forgotten for a long time. This year went beyond its usual boast that it was opening the festival season. This time it was marking a return to normality. It was one of the first festivals without face masks, without vaccine centres, and without the need for a lateral flow test result for entry.

The logistics this year felt more challenging than usual – probably because the line-up featured two of the biggest pop stars around right now – but any issues could easily be forgiven and forgotten after such a long hiatus and a desire from us all to forget the C-word. My only plea would be to get more coverage on linear television next year now that BBC Three is back.

As a veteran of these events, I always feel a sense of pride when I leave a Big Weekend. The Radio 1 family threw themselves into this year’s festival, and the musical offering this year was unrivalled. I think I speak for other listeners in hoping 2022 brings more outside broadcasts from the station. The number of people pulling out their phones on Sunday night to potentially win 2023 tickets just shows how eager the listeners are for more.

Catch up with Radio 1’s Big Weekend on the BBC Sounds app – and watch all of the sets on the iPlayer.

Jono is a social media manager working in the news industry. He created Unofficial Mills back in 2004 when he was just 15! Two decades later he still contributes to the website.
Older Post
Harry Styles announced to headline Radio 1’s Big Weekend 2022