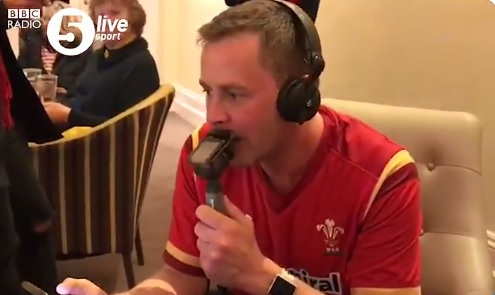 The tables have turned! Scott joins Chappers on his radio show

Scott and Chappers were reunited on the airwaves at the weekend after Scott appeared on BBC Radio 5 Live.

Scott was asked to give his preview of the rugby after his boyfriend got him tickets to the Welsh game.

“Well who’d have thought this would ever happen?” asked Chappers, before there was notable radio silence because Scott couldn’t get his commentator-style microphone to work.

“You have to like put it on your lip don’t you? I’ve never done this before.”

Mills said that the “atmosphere was incredible” and that he had “never seen anything like it” as he arrived at his first rugby game to see Ireland and Wales.

During the radio broadcast he gave a rendition of the Welsh game.

He told Chappers his favourite aspects of the rugby is that you can have a drink during the game, the referee has a microphone on during the match, and there’s a whole saga over the roof.

Ironically it was Chappers who lowered the tone – wanting to know if Mills had a spray tan beforehand, which he did not deny.

Chappers asked if he would be going on-air for the Eurovision coverage in May, which Scott was all for. It does, however, require him to go to Tel Aviv…

Jono is a social media manager working in the news industry. He created Unofficial Mills back in 2004 when he was just 15! Two decades later he still contributes to the website.
Newer Post
Radio 1 adds final artists to Big Weekend line-up
Older Post
Line-up revealed for Big Weekend 2019