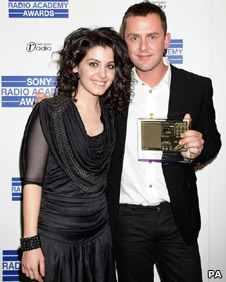 The new faces of Radio 1 lead the Sony Radio nominations

Unlike previous years of the Sony Radio Awards, there are no nominations for the long-serving DJs at Radio 1. The likes of Scott Mills, Chris Moyles, and Sara Cox have been snubbed while it’s the new faces of Radio 1 that have been nominated.

Fearne Cotton is up for ‘Best Music Programme’ and Mistajam is up for ‘Music Broadcaster of the Year’. Gemma Cairney, Radio 1’s new weekend breakfast DJ, is up for the ‘Music Personality of the Year’ award for her 1Xtra show.

The Red Nose Day trails for Radio 1 and 2 are up for an award, and the ‘Superstar DJ’ feature is up for the ‘Best Competition Award’. The use of social media on Radio 1’s homepage has also put Radio 1 in the nominations for, er, ‘Best Use of Multiplatform/Social Media’.

Phil Taggart, who has presented BBC Radio 1 Introducing in Northern Ireland, has been nominated as a ‘Rising Star’ for his work with the station and Radio Ulster.

With all of these nominations under Radio 1’s belt will it translate to Sony Radio Gold awards? We’ll find out on May 14th. For the full list of nominations go here.

Jono is a social media manager working in the news industry. He created Unofficial Mills back in 2004 when he was just 15! Nearly fifteen years later he still contributes to the website.
Newer Post
All change at BBC Radio 1 over the next week!
Older Post
Rihanna to appear on The Scott Mills Show