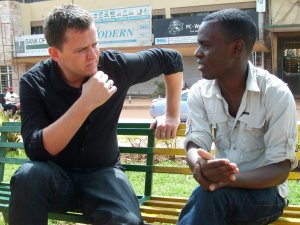 Scott Mills feared for his life filming in Uganda

Scott Mills has said he feared for his life while filming a documentary for BBC3 about homosexuality in Uganda.

During the making of the documentary he met MP David Bahat, a politician trying to push through new laws to punish gay people.

Things turned nasty when Scott explained to the MP he was gay, and asked for an explanation for his views.

Both the film crew and Scott fled, but the ordeal didn’t end there, and armed police turned up at his hotel.

Mills told Pink News: “It’s just something that you wouldn’t think would happen. It was a real shock to the system and we were told to lie low.”

He explained: “I met gay people in safe houses because they had to flee their homes. The newspapers print their names, their photos, even what car they drive. These people are just hounded.”

During the documentary Scott saw first hand the prejudices gay people face in the country, as well as the preachers of homophobic attitudes.

“There was a guy we saw in hospital, he had AIDS and was very ill. But because they knew he was gay, he wasn’t getting the right treatment. He’s dead now.”

“Then there was a girl called Stosh, who had to go into hiding after her face was plastered across the newspapers.”

“It’s all very well reading about these things but when you actually go to Uganda, you realise how bad things are. It was a lot worse than I expected.”

Uganda is just one of 70 countries where homosexuality is considered a crime. Other countries include the World Cup host for 2022 – Qatar.

You can catch a preview of Scott Mills confronting the Ugandan MP here on the BBC3 blog.

The World’s Worst Place To Be Gay? airs on BBC3 on Monday night at 9pm.

Jono is a social media manager working in the news industry. He created Unofficial Mills back in 2004 when he was just 15! Nearly fifteen years later he still contributes to the website.
Newer Post
Isn’t it time the Big Weekend came to the East?
Older Post
Radio 1 finally plays Rihanna’s S&M