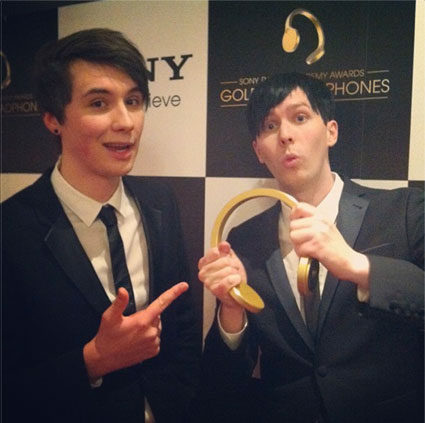 Radio 1 scoops up across the board at the Sonys

The annual Sony Academy Radio Awards took place last night, with some winners being from our very own Radio 1.

The annual Sony Academy Radio Awards took place last night, with some winners being from our very own Radio 1.

Thousands voted for their favourite radio host, to win the Golden Headphone awards, with the eventual winners being Dan and Phil. The popular duo have earned a following of fans since starting out on Youtube, which is incorporated into their all new listener interactive Sunday night show.

Radio 1 came away with a plethora of awards, with Gemma Cairney picking up Best Feature or Documentary for ‘Bruising Silence’, which explored the subject of abusive relationships and ‘The Story of Ed Sheeran’ won gold for Best Music feature or Documentary. The Radio 1 Breakfast Show faced competition from Radio 1’s Review Show with Edith Bowman, for Best Use of Multiplatform, with the Review Show taking gold. Radio 1 also came away with a gong for Best Coverage of a Live Event for the pre-Olympic extravaganza that was The Hackney Weekend.

Other big winners on the night were Newsbeat for picking up gold for Best News and Current Affairs programme. Newsbeat has been Radio 1 and Radio 1Xtra’s flagship news programme for 40 years. We’re sure the Newsbeat team have sore heads this morning.

Disappointingly, Greg James narrowly missed out winning gold for Best Entertainment Programme but did take first place for his efforts with 5Live, with them winning Best Sports Programme with ‘Not Just Cricket’, which we’re sure he’ll be as equally pleased about.

Overall the BBC took home 70pc of the awards – reaffirming themselves as the leading broadcaster for radio.

Charlotte is a student from Leeds with an interest in the media, music, and all things BBC Radio 1. She joined the Unofficial Mills team of contributors in May 2013.
Newer Post
What to expect from Radio 1’s Big Weekend in Derry
Older Post
Help Scott win a Sony Radio Award!